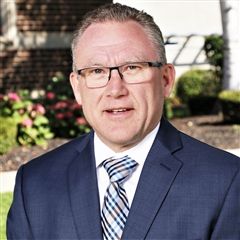 Director of Athletics
rstewart@nicholsschool.org
Rob Stewart has been the Director of Athletics at Nichols School since August 2007. Originally from Kingston, Ontario, Stewart attended The University of Western Ontario in London where he played collegiate football and obtained an Honors degree in Kinesiology, a Bachelor's of Education and a Master's degree in Coaching. After graduation, Stewart continued his playing career in the Netherlands where he played professionally for two years. Choosing to stay in Europe, he accepted a job at the International School of Brussels (Belgium) where, over the span of 15 years, he served as the head of physical education, a teacher of mathematics and science and as the Athletic Director from 2001-2007. Stewart also coached football and basketball while in Brussels.

Upon arriving at Nichols, along with his duties as the Athletic Director, Stewart spent two years as an assistant coach with the Girls Prep Hockey team. He currently coaches the fifth and sixth grade hockey team and the junior varsity girls hockey team. He is a member of the National Interscholastic Athletic Administrators Association and helps in the Nichols admissions office. He and his wife Katie live in Kenmore with their four children: Michael '21, Molly '23, Cecelia '25 and Luke.
Back