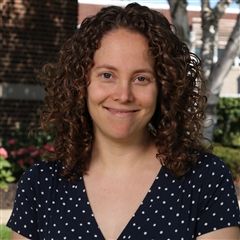 Head of Upper School
Sarah Jacobson was appointed Head of the Upper School in 2020. Jacobson returned to the Nichols School faculty as an Upper School English and history teacher in 2019 after teaching Latin and Greek at the school from 2011 to 2015.

Previously, Jacobson taught Latin, history and theatre at the Founders Classical Academy of Leander in Texas, where she was named the school's Teacher of the Year in 2016. Jacobson also has seven years of collegiate teaching experience at the University of Arizona and the State University of New York at Buffalo. In 2004, she earned the Watson Fellowship and performed archaeological fieldwork in Greece, Italy, Portugal, Spain, Mexico and Peru. Jacobson has also published articles on digital humanities in Literary and Linguistic Computing and Transactions of the American Philological Association.